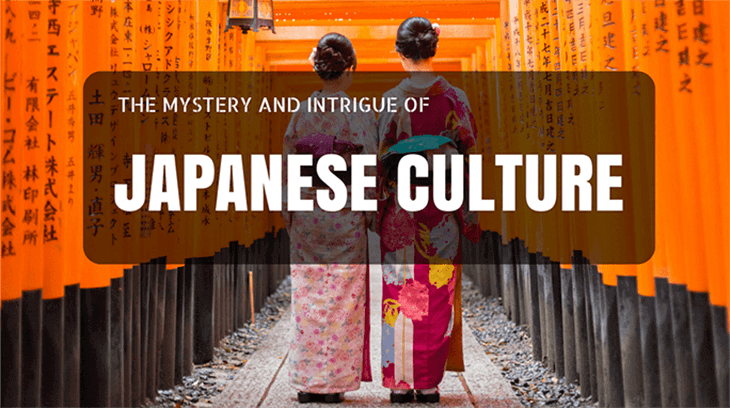 The Mystery and Intrigue of Japanese Culture

Japan is a country that so many people want to visit, but because of its distance from most other destinations, and the expense of visiting, not that many people actually realise their dream to visit this technological wonderland. Whether you end up in Tokyo, or you visit somewhere more rural, Japanese culture is at every twist and turn of life, and it dates back so far into history, that not a huge amount is really known about its origins.

There are certain countries in the world which have a truly rich and intoxicating culture, but they seem to be shrouded in mystery, only allowing the truly curious to learn about the ins and outs of daily life and history. The truth of the matter is however, that these countries have the most intriguing of all cultures, and a little deep thinking and delving is certainly required, in order to learn more.

Of course, Japan is heavily influenced by its neighbour, China. Throughout history the country has tried to differentiate itself, resulting in subtle changes to daily life and appearances, giving the country an identity all of its own.

If you’ve always wanted to visit Japan, or perhaps you simply want to learn more about this far-eastern wonderland, let’s delve a little further into Japanese culture, and go on a small journey of discovery.

We mentioned that Japan has countless nods to China in its history, and that reflects in its cultural make up too. From food to music, architecture to everything else, you will see small influences which make up daily life. Of course, China doesn’t rule Japan, and there is a large amount of individuality. The country was quite isolated for many years, which allowed it to develop its own sense of self.

Nowadays, the western world has influenced the country a lot also, especially the USA, and with the huge technological boom which the country is known for, especially Toky﻿﻿o, you can see influences from Euro﻿﻿pe, Asia, and the USA all over the place.

Japanese is the official language, and this is quite a difficult language to learn! Those who do master the complex language often take a considerable time to do so, but business people find this a hugely important skill to have – much business is done in Tokyo these days, especially when you consider the big brand names that are based here, including Sony, Toshiba, etc. Having Japanese on your resume is hugely impressive. In terms of religion, the two main religions in Japan are Buddhism and Shintoism. Of course, the hugely diverse population also means that there are many other religious denominations living in the country, but in terms of Japanese culture and tradition, these are the main two at hand. You will see elaborately decorated temples in all cities and towns, and these are wonderful places to visit, in order to get a glimpse into everyday life.

Again, you will see a lot of Chinese influences when it comes to the buildings around the country, but there are subtle differences which set them apart. You will see temples with Shinto shrines that are ornately decorated, and traditional gardens with bonsai trees and tea houses. The gardens around Japan are considered to be just as important as the buildings, and have symbolism in religion and culture; Japanese gardens are considered artwork, especially when you think about decorative bonsai trees, which are carefully pruned and cut with precision. On top of this, the colours worn in the kimono also work hand in hand with the season. Springtime kimonos are colourful and often have decorative flower patterns on them, whereas autumn kimonos are darker and have more dulled colours. In the wintertime, kimonos are often made of flannel material, to make them warmer, and they are considerably lighter and brighter during the hot summer months.

The sash worn across the waist is also symbolic in Japanese culture; this is called an obi, and a woman’s obi is often thicker and more decorative than a man’s, which is thinner and less brightly coloured.

Over the last couple of decades, Japanese food has become a worldwide deal, and now you can often find sushi in most large cities the world over. It’s not just about sushi however, because Japan is famous for tempura, noodles, and teriyaki too! The diet of Japanese people is made up of fresh foods and a lot of seafood, which is thought to contribute to a longer lifespan. The traditional foods in Japan are rice, seafood, and vegetables, usually boiled or pickled. Having said that, you won’t struggle to find neighbouring influences in the larger cities too, such as Chinese or Thai cuisine.

Sumo and jujutsu are recognised the world over as martial arts and forms of self-defence and these have their roots in Japanese culture. On top of this samurai was used to train warriors for centuries, and is now a sporting endeavour instead. Kenjutsu, Kendo, Kyudo, and Sojutsu are also forms of martial arts which were born and developed in Japan. Of course, the modern day influences of football, or soccer, found their way into Japanese culture, and with the birth of the J League in 1991, this is now attracting top class players over to the country to compete and win some of the biggest trophies in the modern game. Football/soccer fans in Japan are also very passionate about their teams, so checking out a game is a true experience!

Finally, we have the importance of TV and entertainment issues in today’s culture. Manga and anime are famous across the world over, with a cult following of many types. Of course, video games have their roots in Japan, as this is where the biggest video game consoles have their bases and much production is also done here. Tokyo is one of the most entertaining and technological places on earth. Japan is a very interesting place, in fact many would describe it as truly intriguing and intoxicating. Walking around the bright neon lit streets of Tokyo is an experience, but if you venture away from the capital, and into the rural side of the country, you will see a much more traditional and slower pace of life, one which has its roots in family traditions, religion, and peace.

Japan may have been isolated for much of its history, but the fact that it is now a booming business destination means that it has connected with the super-powers in the world, making it much easier for visitors to venture to the far east and experience the wonder of Japan with their own eyes.

Whether you’re a manga fan, you love anime, or you simply can’t get enough sushi, Japan has so much more to it than all of this and bonsai trees, and learning about the daily traditions is a must do for anyone who is lucky enough to find themselves visiting this country.

Have you always wanted to visit Japan? Where will you go? Tokyo is a must visit but don’t fall into the trap of thinking this is all Japan is about – venture out a little and you will be rewarded in a big, big way!